What’s down the road for drive-thru?

Australia’s obsession with the ‘drive-thru’ is not as old or as deeply-ingrained as our neighbours in the USA, but it has grown to a point where there is now a drive-thru version for just about everything from banks to booze barns. 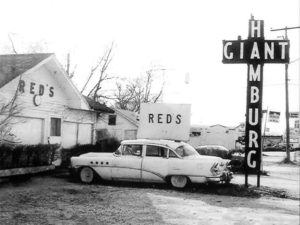 The honour of the first drive-thru restaurant goes to ‘Red’s Giant Hamburger’ in Springfield, Missouri, right on legendary Route 66. It was opened in 1947 by Sheldon ’Red’ Chaney, who served his clients burgers until the outlet closed in 1984.

There have been numerous claims of being the first drive-thru, dating as far back as 1931 by the tastefully named, ‘Texas Pig Stand’ chain but the author of Route 66, Michael Wallis, bestowed the honour on Red’s hamburger joint, anointing it as the ‘Home of the World’s first drive-thru window’.

Today, you can pick up just about anything from a drive-thru including pharmacy prescriptions and cash with some weird and wonderful options like a drive-thru wedding chapel, where else but in Vegas, and the ultimate, a drive-thru funeral parlour where you can view the remains of your dearly departed from the air-conditioned comfort of your car!

In 1996, Maccas even opened a ‘ski-thru’, they called ‘McSki’, of course, in the Swedish ski resort of Lindvalle. The most popular order no doubt being for snow cones! 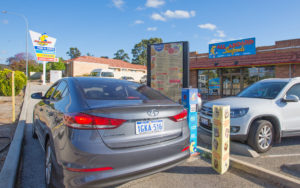 Ever wondered why pedestrians and cyclists are refused service at drive-thrus in fast food outlets like Maccas and Hungry Jacks? It is to do with safety, insurance and liability issues. Same applies for people on horseback or in horse-drawn carriages – a site you would rarely see in modern-day Perth but apparently one that caused a storm and generated a fine for a Maccas customer in Greater Manchester in the U.K in 2013.

Refused service at the drive-thru, the customer rode the horse she was on into the restaurant where it promptly defecated on the floor. The woman was fined. Do you want horse-dung dip with your fries?

What does the future hold for fast food and drive-thru ordering?

Cruising up to a drive-thru in a Subway in suburban Colorado, a customer orders a meal in about 5 seconds at a touch-screen kiosk. The system identifies his previous orders and accepts payment via a scan on his smartphone. The whole process takes less than a couple of minutes. So goes the scenario in an online article for ‘Restaurant Business’. 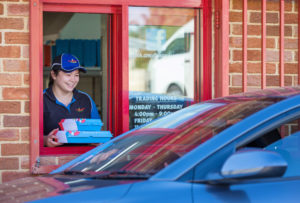 But the drive-thru of the future is likely to become just a pick-up window for customers ordering and paying for food in a variety of ways, including sending a driverless vehicle or delivery service to pick the order up, according to Rob Grimes, CEO of the International Food and Beverage Technology Association in Washington, DC.

Touchscreens, online ordering, mobile apps, interactive menu boards, high-tech ovens and two-way video screens are some of the improvements operators are embracing all over the world to make drive-thru as convenient and as uncomplicated as possible for consumers.

But the one thing that will never change with Cap’n Snappy’s drive-thru at his All Aboard Seafoods outlet on Great Eastern Highway in Midland is that you can order your fish ‘n chip faves or any of the other popular fast food options on the comprehensive menu from our friendly, helpful staff with a minimum of fuss and a guarantee that your order will be filled quickly and will taste great every time.

Our drive-thru is open weekdays from 4pm to 9pm and on weekends from 11am to 9.30pm.