The good oil on our Fish ‘n Chips 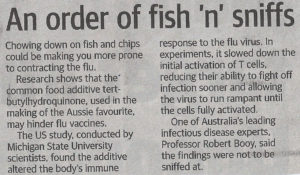 Cap’n Snappy doesn’t get ‘snappy’ too often but when someone maligns the yummy fish ‘n chips that All Aboard has served up to happy customers for over 20 years, his gets his scales up and goes into fighting mode.

Apparently, some bunch of Yanks at a big-name US university who get grants at the drop of a hat to investigate the effect of Donald Trump’s yellow wig on nesting albino albatrosses, undertook a study on the effects of fish ‘n chips on the flu vaccine. Of course, makes sense doesn’t it? Yanks studying fish ‘n chips – a meal they know as much about as the rules of our footy!

Apparently, these so-called scientists have come up with a finding that the additive used in the making of an Aussie food icon may hinder trhe effectiveness of flu vaccines. The study was conducted on rats and mice, mind you. While no humans were apparently harmed in the undertaking of the experiment, you have to wonder where on earth the idea for this study originated and what sort of imbecile decided it would be a good idea!

Just to set the record straight, at All Aboard Seafoods, Cap’n Snappy and his crew only use premium high-oleic canola vegetable oil in our cooking. It’s high in mono-unsaturated fats, low in saturated ‘bad’ fats and is made from premium canola seeds. The oil in our cookers is recycled weekly with the old oil disposed of responsibly through Auscol, a specialist in environmental recycling of waste oil and other products.

Are you getting the picture? One of the few remaining special Friday night and weekend treats Perth families still get to enjoy is being besmirched by a half-baked study by a bunch of individuals who should maybe stick to testing hot dogs before they start sticking their noses into an Aussie staple.

Now we are not saying you should eat fish ‘n chips every night, but as a treat everyone knows you can’t beat the eager anticipation of the unmistakable smell and taste, when Mum or Dad say, “let’s have fish ‘n chips tonight”.

So, we would like to ask you why you love fish ‘n chips and more importantly, what you love about the fish ‘n chips you get from Cap’n Snappy and his crew at All Aboard Seafood? The best response will receive a family feast of our yummy fish ‘n chips.

Oh, and could we suggest that the boffins at Michigan State University stick to what they know and perhaps commission a study on why scientists, with too much time on their hands, undertake mindless rats and mice studies that nobody takes seriously or would ever consider giving up their favourite Friday night for.