Many of us, particularly in Australia with our strong ties to England, tend to imagine that fish and chips originated in the UK but the truth is, the history of fish and chips in much more interesting. Here are just a few fishy facts for you to ponder:

Chips:
There are a several theories as to who invented chips. According to legend in Belgium, a Flemish housewife was one day unable to obtain fresh fish. At the time, the preferred types of fish for poor families was small river fish so she thought she would be able to cut up potatoes into the shape of the fish and fried those instead. There are others over the border in France that belief was that the French first created the chip, or frîte as it is known in locally. This is probably quite unlikely as the French themselves graciously admit that the chip is almost certainly Belgian.

Fried fish:
Frying as a cooking method for fish has a much older history than that of frying of potatoes, simply because potatoes haven’t been around as long. Deep-fried fish came to Northern Europe with the movements of Jewish refugees from Portugal and Spain in the 17th century. Frying fish has proven to be a quick and simple way to cook white fish and a little light flouring of the surface results in a tempting crisp-coated final result.

A match made in heaven: The coming together of deep-fried ‘fish ‘n’ chips’ as an inexpensive takeaway meal was, in fact, initiated by the English. The exact history of this is fairly clear. It was in London’s East End that Joseph Malin opened what was almost certainly the first fish-and-chip shop in England in 1860. Fish and chips are an important part of the psyche of the Brits. 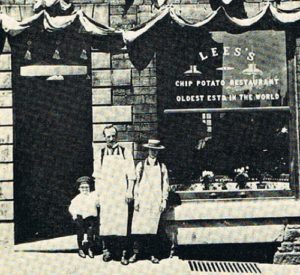 There are lots of different ways to enjoy your fish and chips depending on where you are:

So next time you tuck in to your fish and chips, remember this humble meal has some proud international origins. 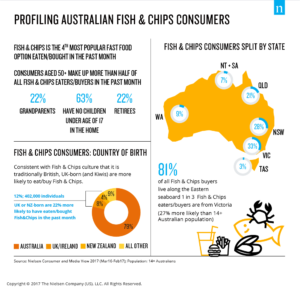