Case Study: All Aboard Seafoods learn to pick and choose modern updates 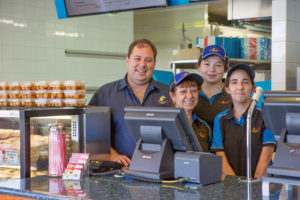 There are so many benefits of being a part of a franchise chain: a proven concept, with marketing and business support. But for the Saccoccia family in Western Australia, the Fish Feast franchise they were a part of wasn’t performing well. So in a sink-or-swim manoeuvre, Raelene and Joe Saccoccia and their son Rino took the leap to create All Aboard Seafoods in 2004.

Today, the gleaming restaurant on Perth’s Eastern Highway is a local favourite. With menu options that vary from the traditional fish and chip offering to burgers, salads, roasts, and even delicious curries, All Aboard Seafoods has managed to ride the wave of our nation’s quickly transforming fast food movement. However, it didn’t happen overnight.

“The franchise we were with was at rock bottom,” remembers Rino. “So it was a necessary move. But we were finally able to do the things we wanted to. We were performing better than they ever had. It took us about six months to get on our feet, but then it really turned around and we were on double digit growth for five or six years after.”

For self-taught businessman Rino, many of his choices came down to intuition and time spent browsing industry blogs online. One of the key changes he had noticed was the diverse demographic their store was attracting, and the rising demand for healthier options. 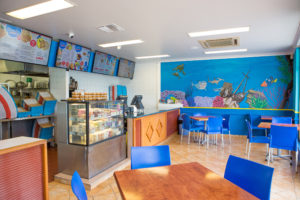 “We had everyone from individuals, to families, to group of friends – and I felt that the day and age of being a single-offering venue was over. We needed to start catering to more than just fish and chips.”

Before long, Rino had introduced not only healthier menu options, but event catering and even take-home meal options. There were finger food platters, roast buffets for weddings, salad rolls, curries, and even a winter lamb shank every now and then.

With a commercial kitchen, sizeable staff, and a public position on the highway that was an advertiser’s dream, Rino knew he would be crazy not to diversify the traditional fish and chip offering.

“We had great food traffic, a huge kitchen, and all our overheads like rent and staffing were already covered. So why wouldn’t we try something new?” 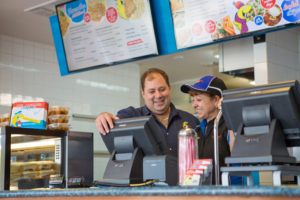 By ‘adding a few bits of equipment here and there’, Rino updated the All Aboards kitchen to be able to handle everything from large quantity catering orders for 400-plus people, to slow cooked, gourmet dishes that they would pre-package for take home meal options.

It was an impressive strategy, made even more impressive by the fact that the extent of Rino’s hospitality training had come from his parents, both of whom had worked in hospitality. Whilst their business acumen was timeless, Rino was still aware that he was growing in a busy, rapidly changing industry environment.

“When I was looking at how I wanted our business to be run, I didn’t look at other fish and chip shops,” says Rino, “I looked to the bigger companies, like Hungry Jacks or KFC.”

He could see that they were departing from their tried and true favourites, updating their menus with more modern options that catered for vegetarian customers, or those looking for healthier options.

“As far as the look of what I wanted to create, no expense was spared to make sure we didn’t look like just another family fish and chip shop,” says Rino. “Everything is upmarket. We paid for the flashy signs, the digital menus, and the bright lights.”

In addition to the aesthetics, Rino knew he wanted nothing but the best when it came to his cleaning program and staff performance, too. For him, it was about having the same high standards as the international fast-food franchises, but with the product and offering of a family-run, local business.

But not everything could be learnt from intuition and his parent’s experience alone. Through his exploring online, Rino stumbled across Profitable Hospitality around five years ago.

“I follow the (PH) website and emails quite closely,” says Rino. “It’s a great resource, especially for things like the templates. They give you a good base to work from and you can always customise from there to suit your specific venue if you need.”

For Rino, his ‘wing it’ mentality served him well in the early days, but he soon needed more formal education around running the business. He finds the weekly Profitable Hospitality emails provides a refresher on topics that, as the sole business owner, he often doesn’t have time to consider.

“I’m a one man band,” says Rino. “Whilst I do have a bookkeeper, the admin side of things can often be pushed out of the way for more pressing jobs. Profitable Hospitality has taught me efficient ways to manage the marketing, the staffing, the ordering, and more.” 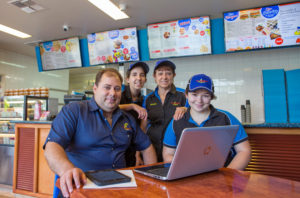 “It just gives you ideas…it makes you stop and think.”

Looking ahead, Rino is quietly confident in the future of his business. Whilst he has embraced technology in the All Aboard Seafoods restaurant, he is wary of industry trends such as ordering apps, which he is certain doesn’t suit their offering.

“We have amazing foot traffic in our store,” says Rino, “which we would sacrifice if we started delivering. Also, given our product and location, fish and chips aren’t going to taste great after travelling on a bike for half an hour.”

With loyalty programs and an ever-changing menu, Rino knows that his formula is working. Whilst it’s certainly a brave move to steer away from the hugely popular ordering apps, Rino knows when to trust his gut instinct. It has, after all, served him well until now.

The success of some of Australia’s best performing hospitality businesses often comes down to simplicity: finding what works for you, and resisting popular trends. All Aboard Seafoods knows its strength as a local eatery, with great service, and even better food – and with Rino looking to stick to his formula, we’re certain it will remain a favourite for years to come.